At the moment Crysterm follows closely the implementation and behavior of libraries that inspired it, Blessed and Blessed-contrib for Node.js. However, being implemented in Crystal (an OO language), it tries to use the language's best practices, avoid bugs and problems found in Blessed, and also (especially in the future) incorporate more aspects of Qt.

Trying out the examples

Using it as a module in your project

Add the dependency to shard.yml:

Then add some code to your project, e.g.: 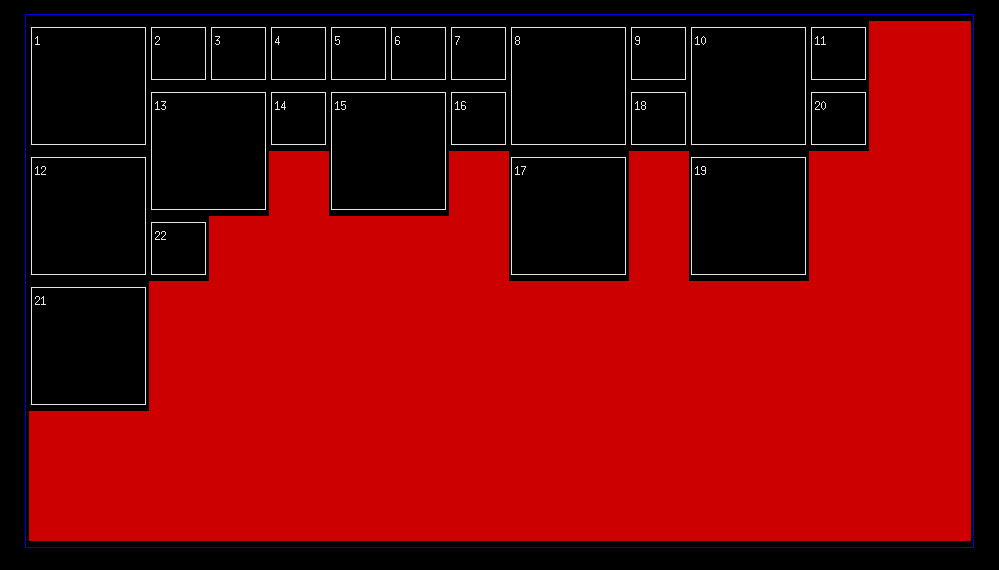 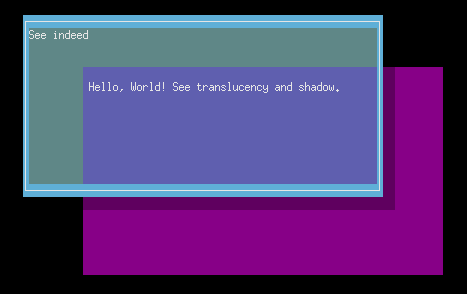 As mentioned, Crysterm is inspired by Blessed, Blessed-contrib, and Qt.

Blessed is a large, self-contained framework. Apart from implementing Blessed's core functionality, its authors have also implemented all the necessary/prerequisite components, including an event model (a modified copy of an early Node.js EventEmitter), complete termcap/terminfo system (parsing, compilation, output, and input from terminal devices; in a word an alternative to ncurses), all types of mouse support, Unicode handling, color manipulation routines, etc. However, these implementations have been mixed with the rest of Blessed's source code, reducing the potential for their reuse.

In Crysterm, the equivalents of those components have been created as individual shards, making them available to the whole Crystal ecosystem. The event model has been implemented in event_handler, color routines in term_colors, terminal output in tput.cr, GPM mouse in gpm.cr, and terminfo library in unibilium.cr.

Unibilium.cr represents Crystal's bindings for a C terminfo library called unibilium, now maintained by Neovim. The package exists for a good number of operating systems and distributions, and one only needs the binary library installed, not headers. There is also a mostly working Crystal-native terminfo library available in terminfo.cr but, due to other priorities, trying to use that instead of unibilium is not planned. Both unibilium and native terminfo implementation for Crystal were initially implemented by Benoit de Chezelles (@bew).)

Crysterm closely follows Blessed, and copies of Blessed's comments have been included in Crysterm's sources for easier correlation and search between code, files, and features. A copy of Blessed's repository also exists in docelic/blessed-clean. It is a temporary repository in which files are deleted after their contents are reviewed and discarded or implemented in Crysterm.

Event model is at the very core of Crysterm, implemented via event_handler.

Please refer to event_handler's documentation for all usage instructions.

The events used by Crysterm and its widgets are defined in src/events.cr.

The default Display and Screen do not need to be created explicitly if you don't need to change any of their options. They will be created automatically if missing when the first Widget is created.

Widgets can be added and positioned on the screen directly, but some widgets are particularly suitable for containing or arranging other/child widgets. Most notably this is the Layout widget which can auto-size and auto-position contained widgets in the form of a grid or inline (masonry-like) layout (LayoutType::{Grid,Inline}).

There are currently no widgets that would represent GUI windows like QWindow or QMainWindow in Qt (having title bar, menu bar, status bar, etc.), but implementing them is planned. (Windows too will inherit from Widget.)

All mentioned classes include event_handler for event-based behavior.

That model is simple and works quite OK, although it is not as developed as the model in Qt. For example, there is no way to shrink or grow widgets disproportionally when window is resized, and there is no way to define maximum or minimum size. (Well, minimum size calculation does exist for resizable widgets, but only for trying to find the minimum size based on actual contents, rather than programmer's wishes. (What we call "resizable" is suboptimally called "shrink" in Blessed because it can also grow.))

Speaking of layouts, the one layout engine currently existing, Widget::Layout, is equivalent to Blessed's. It can arrange widgets in a grid-like or masonry-like style. There are no equivalents of Qt's QBoxLayout.

The positioning and layout code is very manageable; adding new Qt-like or other features is not a big task. (Whether various layouts would then still inherit from Widget or not (like they don't in Qt) is open for consideration.)

Finally, worth noting, there are currently some differences in the exact types or combinations of mentioned values supported for top, left, width, height, and align. It would be good if all these could be adjusted to accept the same flexible/unified specification, and if the list of supported specifications would even grow over time. (For example, one could want to pass a block or proc, in which case it'd be called to get the value.)

Screens contain widgets. To make screens appear on display with all the expected contents and current state, one calls Screen#render. This function calls Widget#render on each of direct children elements, which results in the final/rendered state reflected in internal memory.

At the end of rendering, Screen#draw is automatically called which makes any changes in internal state appear on the display. For efficiency, painter's algorithm is used, only changes ("damage") are rendered, and renderer can optionally make use of CSR (change-scroll-region) and/or BCE (back-color-erase) optimizations (see OptimizationFlag).

Calling render whereever appropriate is not a concern because there is code making sure that render runs at most once per unit of time (currently 1/29th of a second) and all accumulated changes are rendered in one pass.

When state has been set up for the first time and the program is to start running the display, one generally calls Display#exec. This renders the specified (or default) screen and starts running the program.

Crysterm implements its own concept of "tags" in strings, such as {light-blue-fg}Text in Light Blue{/light-blue-fg}. Tags can be embedded in strings directly, applied from a Hash with generate_tags, or removed from a string with strip_tags or clean_tags. Any existing strings where "{}" should not be interpreted can be protected with escape_tags.

In addition to the above color names, one can also specify colors by color index (syntax: {ID-...}), or by RGB hex notation using the 16M color palette (syntax {#RRGGBB-...}. 16M RGB is the recommented way to define colors, and Crysterm will automatically reduce them to 256, 16, 8, or 2 colors if/when needed, depending on terminal capabilities.

One could also define foreground and background colors and attributes by manually embedding the appropriate escape sequences into strings or using Crystal's Colorize module. Crysterm is interoperable with those approaches.

Every Widget has an attribute style, defining the colors and attributes to use during rendering. If no style is explicitly defined, the default style is instantiated. Apart from styling the widget itself, each Style may have overriding style definitions for widget's possible subelements (border, scrollbar, track, bar, item, header, cell, label) and states (focus, blur, hover, selected).

If any of these subelements have more specific settings which define substantial behavior and not just visual aspects, they are defined as properties directly on the widget (e.g. Widget#border, Widget#scrollbar, etc.). These properties also serve as toggles that turn on or off respective elements.

The final goal (still to be implemented) is to be able to define one or a couple Style instances which would apply to, and style, all widgets. Additionally, these definitions would be serializable to YAML, enabling convenient theming.

By default, for development, frames-per-second value is displayed at the bottom of every Screen. When displaying FPS is enabled, Crysterm measures time needed to complete rendering and drawing cycles, and displays them as "R/D/FPS" (estimated renderings per second, drawings per second, and total/combined frames per second). Such as:

The first 3 values display the performance of the current frame, and the values in parentheses display the averages over 30 frames.

Because the rendering+drawing cycle happens up to 29 times per second, the FPS value should stay above 30 of frame skipping could occur.

More specs need to be added.

One option for testing, currently not used, would be to support a way where all output (terminal sequences etc.) is written to an IO which is a file. Then simply the contents of that file are compared with a known-good snapshot.

This would allow testing complete programs and a bunch of functionality at once, efficiently.

List of current bugs / quirks in Crysterm, in no particular order:

If you notice any problems or have any suggestions, please submit an issue.

List of interesting or similar projects in no particular order: